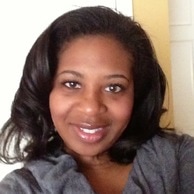 Carmel Avegnon Sanders, a Cleveland native who grew up in New Canaan, CT.,  has always wanted to be an artist.  At the age of 5 she boldly shared with her entire family that she wanted to be a vocalist and an actress when she grew up.  Now, she is not only a proud mother of three children, but also an arts administrator, a youth arts advocate, a teacher/coach and a performer.  Her most recent work could be seen with Good Medicine Productions’ debut of Uptown Scrooge in December of 2016.

Performer.
Carmel has been fortunate to perform domestically and abroad in TV, film, radio and her first love, theatre. She has recently reunited with her passion after taking sometime off to raise her children.

Carmel graduated from Otterbein University with a BFA in Musical Theatre. Upon graduation she moved to Chicago to start The Treehouse Theatre Company with several other Otterbein grads.  She not only performed in productions with the Treehouse, but also also worked with Steppenwolf’s Arts Exchange program, Redmoon Theatre, CORNservatory Theatre, Voice of the City and others.

With her work at well-known and internationally recognized youth theatre companies she was able to develop her artistic philosophy working with young people and hone her skills as a teaching artist.  After working as a teaching artist for years, she joined the staff at the Center for Community Arts Partnerships at Columbia College Chicago where she lead the Youth Theatre Coalition of Chicago in designing workshops for community-based youth theatres in the Chicagoland area as well as organized an annual youth theatre festival. Carmel then became Assistant Director of Community Partnerships, where she brokered collaborations between departments in higher education and community-based organizations. She helped to design  the first of its kind in the United States. a master’s level Concentration of the Arts in Youth and Community Development in the Arts Entertainment and Media Management Department at Columbia College Chicago. She also participated in an exploratory arts exchange program with the United Kingdom,  collaborated with  linguist anthropologist Shirley Brice Heath and contributed to various publications focused on youth arts, youth arts advocacy and the value of arts within communities.  Carmel also was an adjunct faculty member in the School of the Liberal Arts and Sciences Department at Columbia College Chicago. Additionally, She was the Program Director for Little Black Pearl and served on many arts councils and organizational boards.

Theatre heals.
Above all, Carmel is committed to the idea that theatre has a transformative power to create opportunities for meaningful dialog that is vital to the healing of our society.